Getting Granular on Clean Energy Jobs 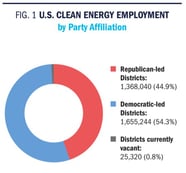 E2 has published new, interesting data on clean energy jobs by congressional districts. Clean energy employment[1] (jobs in renewable energy and energy efficiency) accounts for 3 million U.S. jobs, and the sector will likely grow following the passage of the massive infrastructure bill. E2’s searchable database allows users a closer look at where those jobs are.

Among the more interesting highlights of the report are:

Clean energy jobs create more occupations across more sectors than almost any other sector of the economy.

A searchable database on the organization’s website allows users to search by zip code and learn how many clean energy jobs are in their congressional district.

The analysis[2] highlights the strength of the clean energy sector in terms of the number of people employed. These numbers demonstrate to congressional leadership the importance of this sector to jobs and the overall economy.

[2] E2’s analysis expands on the Clean Jobs in America 2021 report and is based on preliminary employment data collected and analyzed by BW Research in Partnership for the 2021 U.S. Energy and Employment Report (USEER) released by the Department of Energy (DOE).