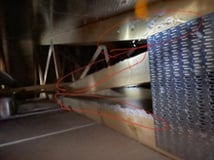 New homeowner Evelyn Cagnetti recently contacted NAIMA to share her frustration about her new Energy Star home, which she had built in February of last year. Shortly after moving in, Evelyn noticed that the upstairs was hot, stale, and stuffy during the winter months. Still, she didn't know why until she checked the second-floor ceiling and found insulation remnants but no insulation.

In April, a subsequent inspection of the home by Thermal Shield (an Arizona BPI-certified professional insulation company) determined that indeed there was no insulation in the second-floor ceiling, just tiny bits of loose-fill insulation attached to the ceiling/roof truss system.

How could this happen in a brand-new home that was supposed to be Energy Star Certified? Evelyn would like to know that, too.

Months of Follow-up, No Resolution

Evelyn, a single mother, says her son's bedroom, his bathroom, and bonus room comprise the second floor. She has spent the past year trying to get the issue of the missing insulation resolved. When she contacted the builder, Fulton Homes, they referred her to the Arizona Registrar of Contractors (ROC), noting that if she wanted to get anything done, it would have to go through them, she said. She traded four separate email complaints with the ROC, which eventually closed her complaint for "lack of evidence."

"Although I got professional opinions regarding the hot second floor, no work was ever performed by anyone but the builder and their contractors. Everyone else was afraid to do anything to mess up warranties," she said.

Recently, she filed a complaint with Energy Star. Energy Star homes require energy rater verification and the National Rater Field Checklist for Energy Star Homes states that "all insulation achieves Grade I per ANSI/RESNET/ICC Standard 301." The rater verifies that all Energy star requirements are met, and their team provides an Energy Star Label.

The label is proof that the home is Energy Star Certified and includes the home's address, builder name, energy rating company name, and date. Curiously, there is no blue energy Star Label on their Energy Star Home, another misstep.

The Importance of Verification

Missing insulation in a home, whether it's new construction or a retrofit of an existing home, is a problem that is easy to observe on-site. This case illustrates why quality assurance and inspection are so important. The homeowner paid a premium for a home that she believed to be superior in energy performance. The builder has paid the contractor to deliver the prescriptive levels of insulation in all areas of the home as required, and a rater was to have inspected the property. But if no one is checking to see that the insulation was installed properly, that is a systemic failure. There's simply no way to verify that the insulation is in place without visual inspection.

Verification and validation are always important in construction, particularly when there's a premium paid for a product. Taking the time to ensure that the job is done well should be a priority for the builder, the insulation installer, and the rater tasked with the inspection.

As Evelyn waits to hear from the folks at Energy Star, Arizona's scorching heatwave stretches on. She feels let down by the very folks who are supposed to care most about quality.

We hope that Evelyn finds a resolution and will follow up with her in a few weeks. In the meantime, we would welcome your thoughts on how the building industry can do a better job of assuring quality.