Trading Off Thermal Resistance is a Very, Very Bad Idea 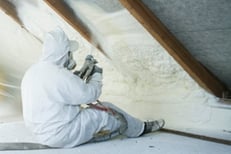 If you’ve been following our blog for some time now, you know that we write regularly about basic building science. In fact, we completed a primer, Building Science 101 with Building Scientist Allison Bailes a few years back. Dr. Bailes, a Georgia resident, recently wrote the state’s Department of Community Affairs to object to a proposal that would allow as little as R-20 spray polyurethane foam (SPF) insulation to be used on the underside of the roof deck in new homes built in the state when R-38 is required. You may ask why R-20 SPF at a blower door rating of 3ACH 50 was proffered as a substitute for R-38 and 5ACH 50. So did Bailes.

Proponents of SPF frequently claim that because SPF is vapor impermeable and can serve as an air control layer and provide thermal control at a specific thickness, it’s not necessary to use as much of it to meet code requirements and ultimately, achieve the desired building performance sought by code. In his letter, Allison points out the errors in this thinking.

“The idea that a home can be just as efficient with less insulation is simply not true with current energy codes. The physics is simple: Less insulation means more heat flow. The way the proponents of spray foam have gotten this approved in the past is by claiming credit for airtightness and reduced duct loads when ducts are in attics. This airtightness issue is moot because all homes must meet the 5ACH 50 state-required threshold for airtightness. The amendment up for adoption would require homes with R-20 SPF attics to come in at 3 ACH 50 instead of 5, but the simulated savings from that increased airtightness plus the reduced duct loads still barely allows the house to pass using the performance path.”

Bailes references Dr. Joe Lstiburek, who also wrote about this issue in the latest ASHRAE Journal article, “A Good Insulation Always Knows Its Limitations.” According to Dr. Lstiburek:

“Here is something that should be obvious. It is a very, very bad idea to try to trade off thermal resistance for increased airtightness because the Model Code minimum airtightness is already so low. Let me repeat. It does not matter because we are already so tight.”

Another Problem with Performance Path

There’s yet another problem with the performance path, according to Bailes. “When modeling an attic encapsulated with R-20 SPF, the software allows the modeler to call the encapsulated attic conditioned space. That means the software assumes there is no heating or cooling load on the ducts. I can tell you that my personal experience in many, many R-20 encapsulated attics as well as my knowledge of physics indicates that ducts in such an attic do add significant heating and cooling loads. These attics may get up to the 120 degrees F that unconditioned attics reach, but at 85-90 degrees, they’re 10-15 degrees F above the temperature of the conditioned space below.”

The Georgia amendment, Bailes notes, contains other requirements to offset the reduced R-value, giving the false impression in the state code that an R-20 roofline is equivalent to an R-38 attic floor, which he called “dangerous and a communications challenge for local jurisdictions.” He adds that the amendment would allow homes that do not have ducts in the attic to use this method even though they would almost never be able to meet code through the performance path.

Bailes concludes that allowing the reduction in R-value for SPF weakens the intent of the code by potentially allowing a less efficient home and degrading building resilience. He cites the example of the Texas blackouts last winter as demonstrative of the need to ensure building resilience as well as energy efficiency.

“What happened in Texas in February stands as another warning against this change. An R-20 attic will cause a house to become unlivable much faster in the case of a power outage than would a fully insulated attic. With more and stronger effects of climate change showing up every year, we should be requiring new homes to be more resilient. This code would do the opposite.

In order to function as the code intends, insulation should be installed according to the recommended R-value, regardless of the insulation type. Although spray foam proponents argue using less foam will achieve similar or better results, less insulation will always mean more heat flow. Allowing tradeoffs doesn’t change that fact.