State Doing the Most on Energy Efficiency 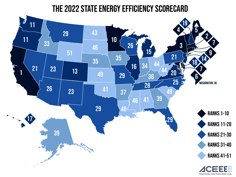 With the high cost of utilities, a federal mandate to reduce greenhouse gas emissions, and a renewed push for more energy-efficient buildings, some states have implemented programs and policies that ramp up energy efficiency. In fact, 10 U.S. states are on the leading edge of efficiency because of state policies that prioritize it. Unfortunately, other states are laggards, according to the American Council for an Energy-Efficient Economy’s (ACEEE) newly released 2022 Energy Efficiency Scorecard.

ACEEE ranked all 50 U.S. states and the District of Columbia on their policy and program efforts to save energy, advance equity, pursue efficiency as a cost-effective, critical tool for reducing emissions, and meet state clean energy goals.

Taking the top spot in the rankings for the second consecutive year is California. According to ACEEE, “the Golden State serves as a leader for other states by saving energy on multiple fronts with adoption of advanced clean energy building codes, stringent vehicle emission standards, and industry-leading appliance standards.” The remaining states that comprise the top 10 include Massachusetts, New York, Vermont, Maine, Washington, and Washington D.C. Rhode Island and Maryland tie for the seventh most efficient, while Connecticut and Minnesota round out the list.

Maine earned the “most improved state,” jumping 11 places to rank fifth in this year’s report. Many of the state’s homes are heated primarily with oil, making it heavily reliant on fossil fuels. However, Maine officials are targeting the installation of 115,000 high-efficiency heat pumps in homes and weatherization of 35,000 homes and businesses by 2030. The state also developed an electric vehicle plan that incorporates a new metric considered for the first time this year by ACEEE: equity. Equity refers to policies and programs that are inclusive of marginalized groups, especially households burdened by energy costs.

Since building use 40 percent of the energy consumed in the United States, they are a prime target for reducing energy waste and emissions. ACEEE notes that “routinely updating and strengthening building energy codes for new construction is one way to ensure a minimum level of energy efficiency for new residential and commercial buildings and major renovations.”