The 2018 International Residential Code (IRC) and the International Energy Conservation Code (IECC) offer new provisions for HVAC duct design within ventilated attic spaces. These provisions increase the options for builders working to meet the requirements of the energy code using the performance or Energy Rating Index (ERI) method of compliance.

2018 IRC and IECC Requirements when Ducts are Buried in Insulation

To meet the 2018 IRC and IECC installation criteria for ducts buried in insulation, heating and cooling system ducts within ventilated attics must be installed in accordance with one of the three methods illustrated below, dependent on specific climate zone requirements.  The first method in Figure 1 illustrates the minimum R-value of attic insulation required for ducts partially imbedded in attic insulation, ducts resting on top of truss or rafter chords and ducts resting between truss chords.

Ducts that are “deeply buried” in attic insulation can be considered to be insulated to an effective R-25 value for building energy simulation purposes provided the following criteria are met:

The figure below illustrates installation methods for the duct to be considered “deeply buried”.

Ducts Considered to be in Conditioned Space

Under the second provision, ducts in an unconditioned attic are considered within conditioned space for building energy modeling purposes, when the following criteria are met: 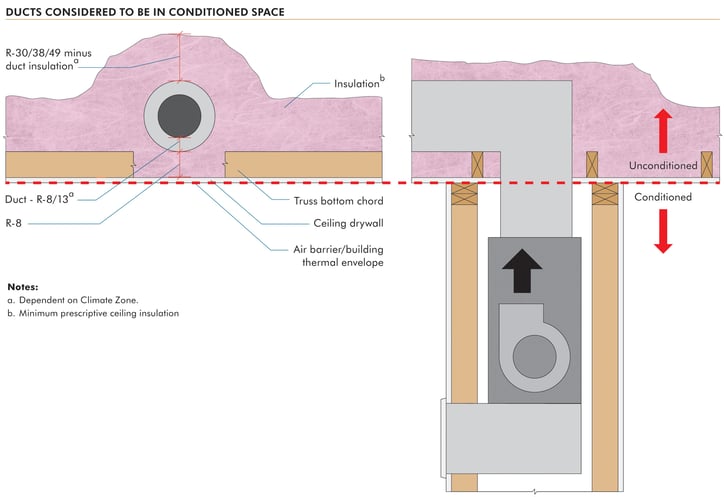 When incorporating these buried duct options they must be installed carefully so as to avoid condensation problems.  While all applicable IRC duct requirements must be followed, making sure the vapor retarder on the duct insulation remains sealed, duct leakage limits are not exceeded, and that consistent minimum insulation levels around ducts are maintained will help minimize the potential for condensation with buried ducts.

Applying the ERI / HERS Index

These buried duct provisions will most likely affect how a building will be modeled within the energy modeling software used to determine compliance with the Energy Rating Index option or Simulated Performance option within the IRC and IECC. The ERI score is defined as a numerical score where a home with a score of 100 theoretically has the same level of energy efficiency as a home built to the 2006 IECC and 0 is equivalent to a net-zero energy home. Each integer value on the scale represents a one percent change in the total energy use of the rated design relative to the total energy use of the ERI reference design.

The advantage of the two buried duct provisions are noted in the table below as reduction in the total ERI score.