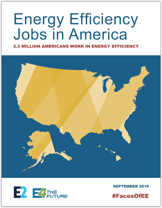 E4TheFuture’s recently released 2019 report, “Energy Efficiency Jobs in America,” demonstrates the impressive growth of the energy efficiency workforce, which now numbers more than 2.3 million people. The annual report is based on data from the U.S. Bureau of Labor Statistics and is a comprehensive survey of thousands of businesses, using a methodology developed for the U.S. Department of Energy.

Energy efficiency jobs represent the largest job-creating category in the energy economy, accounting for 76,000 of the sector’s entire growth of 151,700 jobs last year. In fact, the energy efficiency industry employs more Americans than the entire fossil fuel industry in 41 states and the District of Columbia and twice as many nationwide.

Who Are Energy Efficiency Workers?

Energy efficiency workers include those who manufacture and install high-efficiency systems, controls, windows, and insulation in existing and new homes and buildings. They design and construct high-performance buildings that earn certifications such as LEED, and upgrade and repair heating, ventilation and a conditioning (HVAC) equipment. These workers also manufacture and install ENERGY STAR-certified appliances, lighting, ceiling fans, and other equipment that ultimately saves homeowners, businesses, schools, and other organizations money and helps reduce greenhouse gas emissions.

The leadership of state and local governments as well as Congress plays an integral role in expanding energy efficiency in America, which ultimately advances sustainability and reduces the operating costs of buildings and homes, providing direct financial savings to home and business owners and fueling job growth for the energy efficiency sector. The continued leadership of America’s policymakers is critical to ensuring that energy efficiency remains a top priority for the nation.

Read the detailed report here and the national summary here.