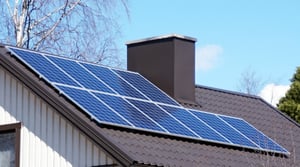 As communities and municipalities look to adopt improved building energy codes to meet climate or resiliency goals, including additional requirements for solar PV energy production is a common discussion point.

There are often suggestions to allow for a larger PV system and forego other energy efficiency improvements that were included in the last few energy code updates. It’s argued that if a home has a solar PV system included, it is more cost-effective to expand that solar PV system than to make efficiency improvements such as improved windows, walls, or ceiling insulation. The question is, more cost effective for whom?

Currently, under the 2018 International Energy Conservation Code (IECC), the only compliance path where builders can get credit for using solar PV systems is the Energy Rating Index path. Within this compliance path, on-site renewable energy (solar PV) can only be included if the thermal envelope meets the levels included in the 2015 IECC.

Cost competitiveness of solar vs. efficiency

When using solar PV for compliance, claims that additional solar PV is more cost-effective than the efficiency improvements that they are replacing can be misleading. The real question to be asking is who is receiving the benefits of such a trade-off – the homeowner, the builder, or the utility?

Builder. From the builder perspective, there are a few ways that installing a bigger solar array can be beneficial, with the most cost savings coming from installing a leased solar PV system. But, the builder then presents the homeowner with a lose-lose scenario – a less efficient house that comes with a lease to pay for the energy that would have been avoided. The builder can reap the cost savings of not installing the efficiency improvements that were required by code and pass that cost on as the perceived benefit of a solar PV system that they also do not have to pay for. But over time, that less efficient home will use more energy and possibly be less comfortable than it would have if envelope efficiency had been a priority.

Utility. Lastly, the utility also plays a role in this as the addition of new housing translates into increased demand on the electrical grid. Energy efficiency upgrades have a different impact to the peak kW than the addition of a solar PV system. The difference between the reduced peak of thermal envelope efficiency improvements and a solar PV system can be anywhere from 0.2-0.5kW better for a thermal envelope solution. When adding this up over hundreds or thousands of homes it can begin to have a significant impact on the utility’s peak load.

When comparing efficiency improvements already included in the energy code to leased solar PV systems, the solar PV systems are cost-competitive for builders, but ultimately not for homeowners. In energy efficient home building, the best and lowest-cost option is to invest in efficiency and avoid the expenditure on energy in the first place. Solar PV is a component that can be layered on after cost-effective envelope efficiency improvements have been put into place.

[1] Estimated using EnergyPlus modeling for a typical home in Nevada assuming $0.02/kWh reduction in electricity for using a PPA, a 2,400 sq. foot 2 story home with slab on grade construction a heat pump (20%) and gas (80%) per DOE methodology.