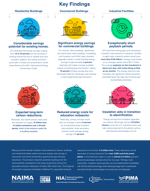 ICF was tasked with quantifying the lifetime energy savings, economic benefits, and carbon emission reductions that can be achieved with insulation improvements to existing single-family homes, commercial buildings, and industrial facilities. The study’s findings underscore insulation’s enormous potential to help each corner of the country meet building performance standards and carbon reduction goals.

“Both the Infrastructure Investment and Jobs Act and the Inflation Reduction Act, passed in the past year, allocate billions of dollars in investments to improve the energy efficiency of our existing building stock,” said Curt Rich, President and CEO of the North American Insulation Manufacturers Association (NAIMA). “As government and business begin to tap into this transformational level of funding, they should pay close attention to the show-stopping carbon reductions and consumer savings that can be realized by focusing on upgrading tried-and-true measures like insulation and air sealing.”

Key findings from the independent study include:

The study assessed the state- and national-level energy and emissions savings benefits as well as the economic benefits that could accrue over 50 years as a result of the implementation of code-compliant insulation retrofits.

The study assessed the impact commercial roof and pipe insulation retrofits would have on state- and national-level energy use, energy costs, and carbon emissions on an annual basis and over a projected 30-year service life. ICF analyzed a range of commercial buildings, including schools, small to midsize office buildings, mid-rise apartments, and stand-alone retail.

The study assessed the state- and national-level energy and emissions impacts as well as the economic benefits that could accrue over a 20-year horizon from the installation of code-compliant steam pipe insulation in a select number of manufacturing sectors.

Access the executive summary here and the full report here.