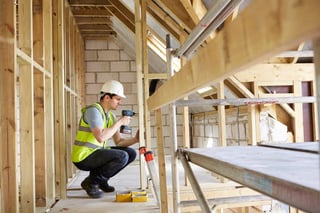 The Occupational Safety and Health Administration (OSHA) last November issued a final rule that updates its walking-working standard, first published 44 years ago. The new rule now makes general industry subject to the fall protection requirements, but does not change construction and agricultural standards. OSHA’s expansion of the walking-working surfaces rule signals that it views reducing worker injuries and fatalities seriously and builders and their contractor business owners should take note, says Mark Paskell, Founder of The Contractor Coaching Partnership, Inc.

Paskell’s company trains contractors servicing the residential homeowner market as well as builders and has instructed hundreds of construction employees in workplace safety procedures. He says while residential construction sites have become safer in recent years, the problem is that safety training is not a first priority for many contractors and builders. He offered two recommendations to reduce injuries and builders’ risk of being fined by OSHA.

Paskell believes that OSHA should require all builders and contractors to provide OSHA-10 training, a 10-hour training course commonly conducted for commercial contractors in preventing worker injuries such as falls and electrocution. “OSHA isn’t telling residential construction workers to get OSHA-10 training, but this training is a requirement for contractors who want to work on publicly-funded commercial projects in Massachusetts,” he said.  “Because this training isn’t mandated for residential builders, most don’t do it, but in Massachusetts, insulation contractors for example, are required to become licensed construction supervisors and they can’t get that certification without completing OSHA-10 training,” Paskell noted.

Some states have laws that require OSHA 10 training for contractors’ employees who work on publicly-funded projects. OSHA requirements must be followed by commercial and residential contractors. Paskell estimates that a small percentage of residential contractors and builders offer such training to employees, but the potential for steep OSHA fines, which he says are up an estimated 80 percent in recent years, should elevate the importance of safety training for builders. He cited as an example a case where OSHA proposed a penalty of $107,785 for a large production builder and its sub-contractor for the contractor’s repeated citations for safety violations. The builder’s share was $69,000 with the balance going to the subcontractor.

In another case, “OHSA visited the job site unfortunately after a worker died as a result of injuries sustained in a fall,” he said. “When you’re literally responsible for peoples’ lives, you have to increase your focus on safety.”

Offer Training in English and Spanish

Paskell said one of the biggest hurdles he sees for contractors and builders in providing comprehensive safety training is related to language barriers. “In my state we have a huge population of workers where English is a second language, so offering materials in Spanish and in some cases Portuguese is much more important,” he said. He recommended that builders work closely with each of their subcontractors to verify and document that the required safety training has been taken place for all workers, not just general industry employers now subject to the new rule related to preventing slips, trips and falls.

“At a construction site, there are many opportunities for injuries that aren’t related to these new regulations, Paskell said. “Contractors and builder alike have to increase their knowledge about the potential for accidents and injuries on the jobsite, the resulting fines and penalties that could be levied by OSHA, and have procedures in place to mitigate construction accidents as a result of worker safety violations.”