Ice Dams and How to Prevent Them 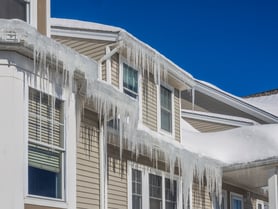 Any time there are icicles dangling from gutters, it is a sign of a potentially costly and avoidable problem in a home – an ice dam. Ice dams form when the temperature in the attic is above freezing and there is snow on the roof. The snow melts on the roof and drips downward toward the edge and the gutter. If it’s cold enough, it re-freezes at the colder roof edge, which means the water does not drain. This frozen water forms a “dam” which prevents drainage and can cause water to leech back into the home, either into the ceiling/attic or down into the walls below. And that can be a very expensive problem to fix.

In fact, the Insurance Information Institute (IIS) estimates that the average homeowner claim for water damage and freezing is just over $3,000. Worse still, this seems to be a growing problem. IIS also reports that claims resulting from water damage and freezing have increased significantly in recent years. These are problems that can be avoided by properly air sealing and insulating the attic as well as having proper ventilation.

If an attic is not conditioned, the temperature of the whole roof should be largely consistent all over and snow wouldn’t melt in one area and then re-freezing in another. However, if heat is finding its way from the conditioned living area into the attic there will be warm areas and cold areas, which may lead to ice dams. Air sealing and insulation the attic space is the best way to prevent ice dams because it helps slow the heat transfer. As both heat flow and warm air travel from areas of higher temperature to areas of lower temperature. Proper air sealing and ceiling/attic insulation can prevent warmth from escaping and causing ice dam issues.

But no matter how much insulation there is in the attic, there’s still some heat in the attic. Attic ventilation gives the heat somewhere to go and moderates the temperature so there’s not an excessive amount of heat in the space, which is a basic requirement for the formation of ice dams.

Spending the time and money to prevent ice dams is much easier—and more economical—than trying fix them once they form. Calling a roofing crew to remove ice and snow is costly and more expensive than having an insulation professional seal and insulate the attic space. Further, there’s a risk of roof damage during the removal process and ice removal won’t stop ice dams from forming again. Insulation and air sealing as well as proper ventilation are a much more reliable and permanent ice dam solutions.