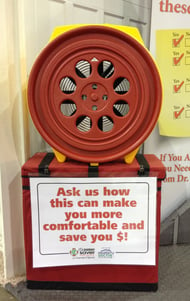 Thirty-six states currently use a version of the residential energy code equivalent to the 2009 IECC specification or lower. Many of these states will soon act to update their residential energy code to the more modern versions of the IECC, which include more stringent air leakage requirements measured by blower door testing. However, many builders will find it difficult to meet the 3 ACH 50, as required in CZs 3-8 starting in the 2012 IECC, unless they properly train their tradespeople in building science and the basics of blower door testing, according to Robert Nelson, managing principal of Ener G Home Performance Consultants.

According to Nelson, builders in states that have recently or will soon adopt the more the recent versions of the IECC experience a significant failure rate for air tightness tests during the first year.  He estimates that 50 percent of new construction homes will fail the air tightness test, largely because of a lack of understanding basic building science and what is required to achieve air tight construction. “Success starts at the architectural plan stage,” he said. “Some jurisdictions require a thermal boundary plan in the set of construction documents that help define the thermal boundary, which also defines the air boundary as they coexist in the same place,” he added. The site superintendent should have this information. Nelson advises builders whose local jurisdiction doesn’t require such a plan to send a request for information to the architect to get the thermal boundary information.

“The site superintendent has to make sure that the building envelope remains intact as construction progresses on the project.”

“The professional energy engineer or auditor must compute the square footage of the building and the air volume of the new home per ASHRAE standards in order to determine the proper air tightness allowed by the energy code,” Nelson noted. “Providing a set of digital construction plans will help in determining building envelope issues. It’s also great for quantity takeoff needs,” he added.  This information is often analyzed in the office. But the field testing is the majority of the task.

When the auditor conducts the blower door testing, each home must be put through “worst case” scenario conditions, making sure all windows are closed and locked and that exterior doors have weather stripping in place. Auditors look for possible building envelope failures, turn off all HVAC systems, make sure combustible appliances are off, and coordinate with the superintendent during the testing so that they understand the process.

Often times, Nelson says, air leakage problems are identified at the worst possible time, when walls have been closed. Ener G consulting offers a “close in” inspection that takes place before walls are closed, to look for faults in the building envelope, something that Nelson advises builders to consider.

“This is the time to catch problems – before they are hidden and become costly to fix,” Nelson added.

In his experience with blower door testing, Nelson said the three main contributors to failure for homes are bath fans, sprinkler heads and fireplace inserts.

Nelson strongly recommends basic building science education for construction tradespeople, but particularly those who have a role in ensuring the air tightness of homes.

“Every builder needs to realize that all trades involved in construction must understand building envelope principles and that they all participate in making the building envelope a sealed and effective thermal boundary of the building,” Nelson explained. “Many trades arrive on a job site after the insulation companies have installed sealing and insulation to create the air barrier and thermal boundary of the building, but if the owner wants a change that requires the electrician to run new wires, for example, they drill new holes in the top plates of the walls in the attic area. The electricians need to be aware that a hole in the air barrier has just been created and it must be sealed.”

Nelson says this happens all the time in home construction and the builder will come back to the insulator to address the issue when all trades bear responsibility.

"Education on building envelope principles for all key trades on the project needs to occur," he noted. "Someone from each trade needs to be rought into the loop to they can provide oversight to the skilled workers performing each job. That will go a long way toward meeting the air tightness requirements of the new energy code."