When a new version of the International Energy Conservation Code (IECC) is completed there can be a good deal of lag time between publication and market impact. This is because states need to adopt the new code, a process which is measured in years, not weeks or months. However, there can be exceptions to this general rule. The 2018 IECC laid out a prescriptive path for the use of buried ducts with fibrous insulation in vented attics, for all climate zones. This new path was approved because it will allow builders to get much of the energy efficiency benefits of an unvented attic with closed cell spray foam by instead doing a traditional vented attic with the ducts buried in fibrous insulation. Data from DOE’s Building America program shows buried ducts can save more energy than a home with vented attics and ccSPF below the roof. In fact, the data from the DOE report excerpted below shows deeply buried ducts are 20-30% more efficient than an unvented attic system[i]. This code change lowers the cost of designing and building higher performance homes, but if it’s in the 2018 IECC, how can it have an impact now? 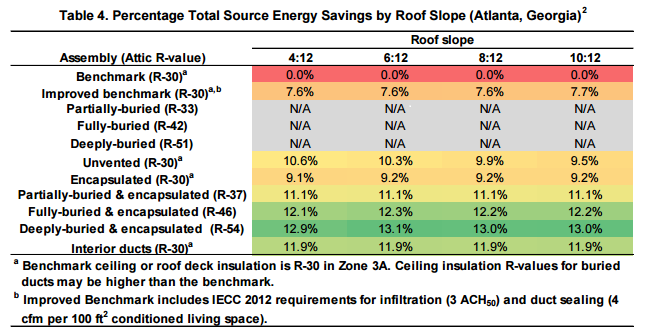 Construction practices not limited to code

Many builders are aware that while the IECC does contain many prescriptive requirements, it does not preclude use of products and practices which aren’t specifically referenced in the code. The mechanism by which the IRC allows this is Section 104.11 “Alternative material, design and methods of construction and equipment”. This section lays out how a builder can get approval for an approach that the code itself may be silent on. Previous versions of the IECC did not disallow use of buried ducts in any climates; they were just silent on the subject. Because of this, builders operating under any version of the IECC are free to use the 2018 IECC prescriptive approach to buried ducts by taking the language to their code official and, under IRC 104.11, getting approval for the design.

“This is huge folks. Huge”

This practice is not new in many parts of the country; however, concerns over condensation prevented it from taking off in the hot/humid climates, namely 1A, 2A and 3A. Years of research by Building America, Home Innovation Research Labs, California Air Resources Board (CARB) and others focused on understanding what was needed to prevent condensation in hot and humid attics. What was most critical was finding out what level of duct insulation was necessary to prevent condensation. After years of research in the field, these “magic R-values” (to quote Dr. Joe) were found to be R-13 in hot/humid zones and R-8 everywhere else. This was the “huge” discovery that now allows builders anywhere to utilize this practice with confidence. However, managing condensation, and getting the maximum level of energy savings from this design approach, requires more than just the right duct insulation levels. This approach also requires (among other things):

This is not a full breakdown of every element of the code change. In the coming months, Insulation Institute will be offering more material on this practice, including a Tech Spec from Home Innovation Research Labs which will provide clear guidance on how to design, install and get code approval for this approach. We think this practice has the potential to offer builders a high performance alternative to more costly unvented attic designs. Stay tuned for more.