Building Science for High Performance Homes-Whose Job Is It?

A basic understanding of building science can help improve the performance of homes. This is a requirement for builders seeking quality construction, but it is also relevant for contractors, designers and home energy professionals, who should be knowledgeable about building science in order to construct a highly energy efficient and durable home for the location and climate. Yet, lack of building science knowledge – a basic understanding of how buildings work -- often leads to misconceptions about the performance of the home as a system and even the role of particular products, such as air barriers and insulation, according to Allison Bailes, Ph.D., founder of Energy Vanguard, one of the top building science consulting firms in the nation. 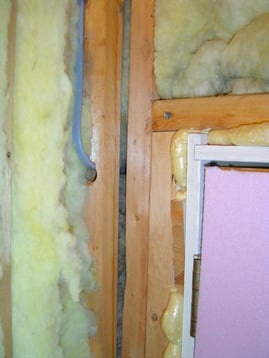 In a recent Energy Vanguard blog post, Bailes asked a vital question: are you confusing insulation with air barriers? Using as an example the photo at left, Bailes argued that an individual trained in building science would know that the dark grey patches visible on the fiber glass insulation were a symptom of a larger problem: the lack of an effective air barrier.  A less knowledgeable person might attack the insulation product itself. The solution therefore, is to encourage broader knowledge across the housing industry of the basics of building science.

It’s a solid premise that would be tough to argue against. In fact, the U.S. Department of Energy’s Building America Program Office in its 2013 report “Building America: Building Science Education Roadmap,” urged a building science education focus across the entire spectrum of players involved in constructing and improving new and existing homes by 2030. It called the emphasis, “essential to the construction of a great building with higher productivity, lower operational and repair costs, and a much smaller carbon footprint.”

Absent obtaining a degree in the field, there are some basic building science principles that everyone working in home construction should know: that the house is a system, homes should be constructed using techniques and materials appropriate for the climate, and how to control the flows of heat, air and moisture.

“Painters discovered back in the 1920s and ‘30s that the various components of a home are interconnected. When they painted new homes with insulation in the walls, they got call backs because the cladding stayed colder and the paint failed,” Bailes said. The problem wasn’t the insulation, though; it was the exterior moisture management details.” Looking for the cause and solution to this problem was the start of modern building science understanding – the house is a system.

The second foundational principal of building science is to use techniques and materials appropriate for the climate. “For example, you don’t want to put plastic behind the drywall in Miami (or in any building that’s air conditioned, really), and you don’t need to use windows with a low solar heat gain coefficient in Toronto,” Bailes explained.

Finally, Bailes said that good building science recognizes the need to control for the flows of heat, air and moisture – which means understanding the location of the building enclosure and the roles of the difference components that act as control layers. Most house wraps, for example, aren’t vapor barriers, only air barriers

Educating an Industry – Whose Job Is It Anyway?

In addition to housing industry professionals, including architects, designers, multi-family building performance managers, builders, engineers and tradespeople, DOE said professional organizations, K-12 teachers and students, affordable housing stakeholder and transaction process institutions, such as underwriters, appraisers, insurance companies and real estate professionals need to be versed in the basics of building science, which leads to an important question: who should take ownership of educating involved with home construction? According to Bailes, there is no one right answer.

“I don’t think it’s the same answer for every project, and it’s also going to depend on what type of project it is. Manufacturers can definitely do more, but it really comes down to the team doing the designing and building,” he says. “Some architects know a lot of building science and push for it to be done right. In other cases, it’s the builder. Having a third-party involved can help, but there are good examples of companies that do great quality control on their own.” He cited a talk by Walsh Construction’s Marty Houston about the company’s quality control process that he found particularly impressive. Bailes articulated the need for oversight. “Every project needs someone who can look at what’s going on from a building science perspective” he said. “As [Building Science Corporation’s] Joe Lstiburek told me recently, the gap between stupid and hurt is narrowing.”

“With the increasing requirements for insulation and air tightness in building codes, problems are showing up quicker than ever,” Bailes revealed. “When a house starts rotting 10 or 20 years after it’s built, the builder’s usually off the hook, but when it starts rotting five or two or even a year later, the builder’s going to get a call.”

What’s a Building Professional to Do?